Detailed program and all the rarieties about this festival. The Palio of Siena is marked by specific rituals that are going on for the whole day and are ending with the horse race, the so called “carriera”, which takes place in Campo square twice a year on th 2nd July and 16th August.

The organization of the Palio is carried on all year round by the districts’ administration (here are called “contradas”) and by the Municipality of Siena. It is long and traditional organisation and it shows up all its perfection the day of the race.

What does it really happen during the Palio Day?

On the Palio day, everybody wakes up with the heart in their throats knowing that this day will be marked by the word “waiting”. First of all it’s important to say that, where not clearly specified, toursists can take part to every event of the Palio days. It is advisable from their side to be curious but on the other hand respectful of the traditions. 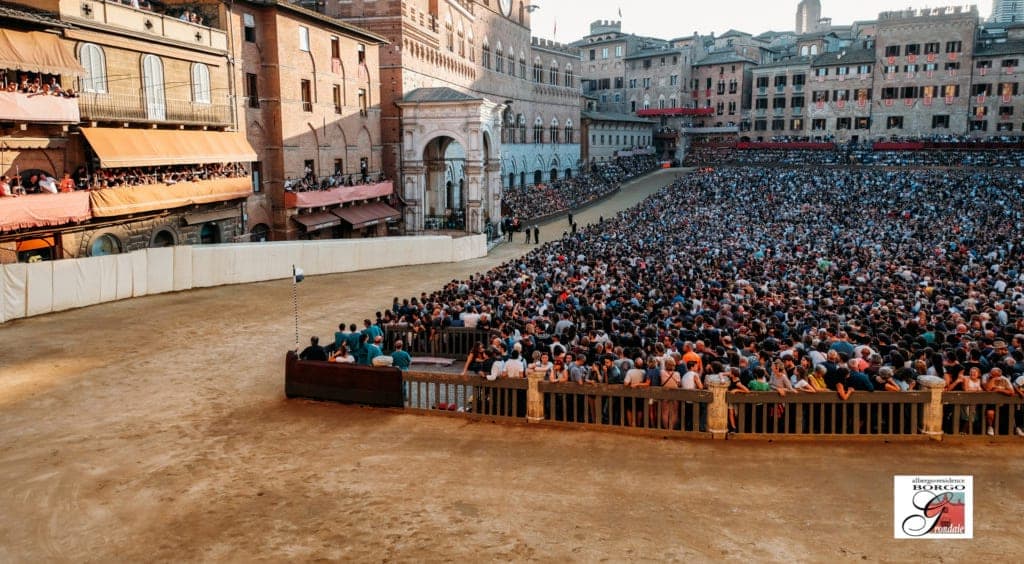 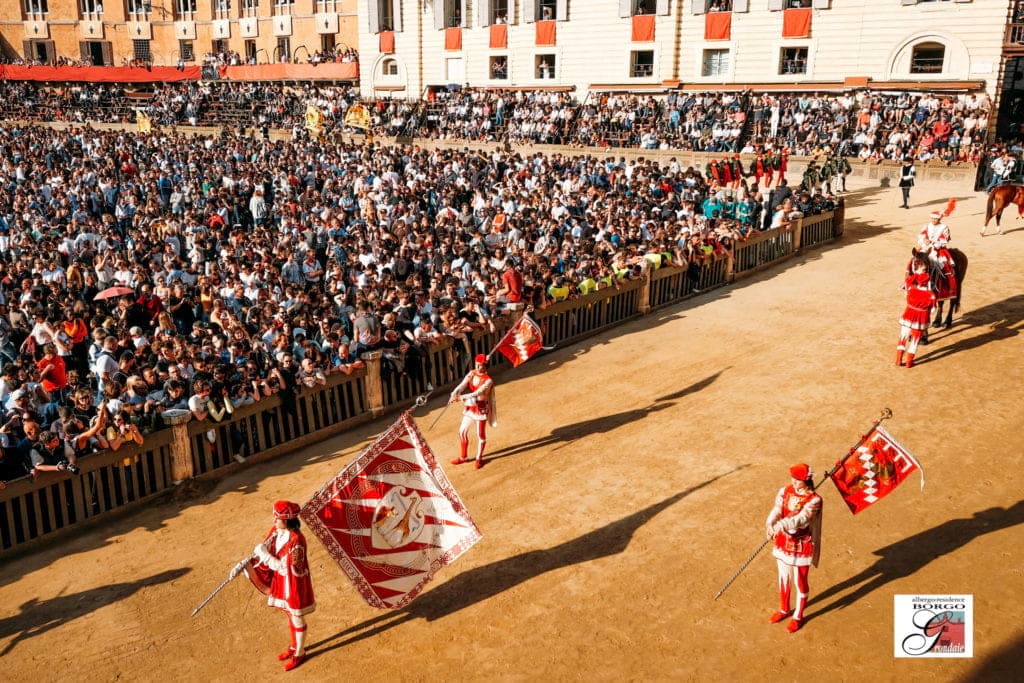 the 17 contradas are all involved inthe parade, each with its own drummer and 2 flag players 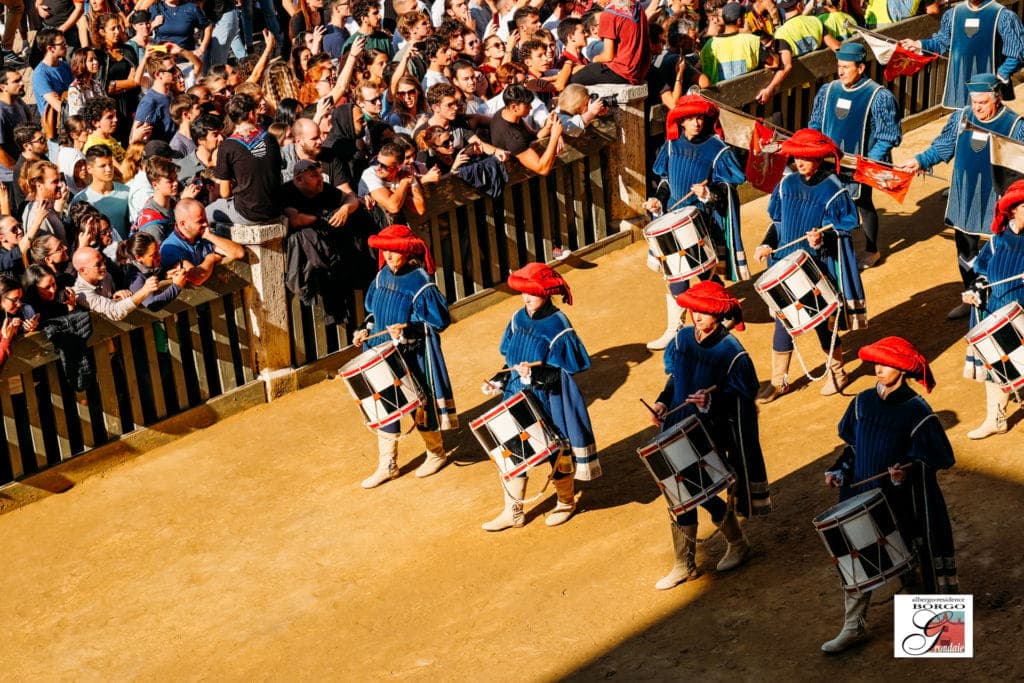 Palio of Siena: the Palio music band with the “Chiarine” are playing the Palio soundtrack

So now let’s get dipped in the Palio days… Jockey’s Mass: 7:45am

Early in the morning, the ten Jockeys are attending a special Mass in the Chapel in the Campo Square. This ceremony carried out by the Bishop of Siena, is part of the propitiotary rituals and even if the jockeys are all experts, the “Lucky Lady” is still playing an important role in the race. We also remind you that the jockeys are running without a saddle.

Right after the jockey’s mass, the so called “Provaccia” (last but not less important rehersal) will take place right in the Campo Square. The Contradas have to take part to this trial for “Good Luck” but you won’t see horses running too fast because they have to preserve them for the coming race. By the way, the square will be closed around 8.40 am, therefore we highly recommend you to enter it a bit earlier.

After the “provaccia” there will be the jockey’s signature inside the Palazzo Comunale: this is the official contract sign by the jockey to the contrad and from now on nothing can change it. Unfortunately, to this formal ceremony, tourists are not allowed. So in the meantime you can have your first or second breakfast in the Campo Square or take the chance to visit the Townhall with its amazing museum..

The Contradas’ Dressing rituals : Around 1:00pm

In every Contradas, early in the afternoon there will be the dressing rituals for the parade. The lucky member of the contrada, who have been chosen for the parade, are called “monturati” (a typical sienese word which means people who wear precious renaissance styled clothes) with the colors of their contrada. Everyone feel very proud to take part at the historical parade, which show up the history of Siena, from its glorious past as a Republic to the Florence dominance in Renaissance time. It is especially celebrated the well-know battle of Montaperti that has been won against the florentines in 1260.

Horse’s blessing: different from every contrada: around 2:00pm

Usually the horse’s blessing rituals takes place inside each Contrada’s Oratory. But sometimes, when the entry is particulary hard (for example the stairs to reach the Drago’s Church) or when the horse shows some signs of restlessness, it might take place outside too. If the horse’s blessing takes place inside the Oratory, we suggest you to leave this moment to the few contrada’s members who have the chance enter it. On the other hand, if this ritual will be outside, you can easily attend it but you have to follow the only rule given: be quiet during the short cerimony in which “il correttore”, the Contrada’s priest, will bless the jockey and the horse and will say ” Go and come back as Winner!”. Keep in silence during and after the cerimony, then you can claps your hand until the horse has been taken away in order not to scare him.

After the horse’s blessing, the member of each Contrada taking part to the parade, are gathering at the Duomo Square. Each Contradas is composed by 9 performers: a drummer between two flagplayers, a duce between two knights and a major pageboy between two flag-beares pageboys. Before the parade enters the Campo Square, other people are joining the group: the jockey riding the so called “soprallasso” (a type of big horse used only for the historical parade) with groom, the “barbero” (the horse that takes part to the race) and the “barbaresco” (the man in charged of taking care of the Horse during the Palio’s days). 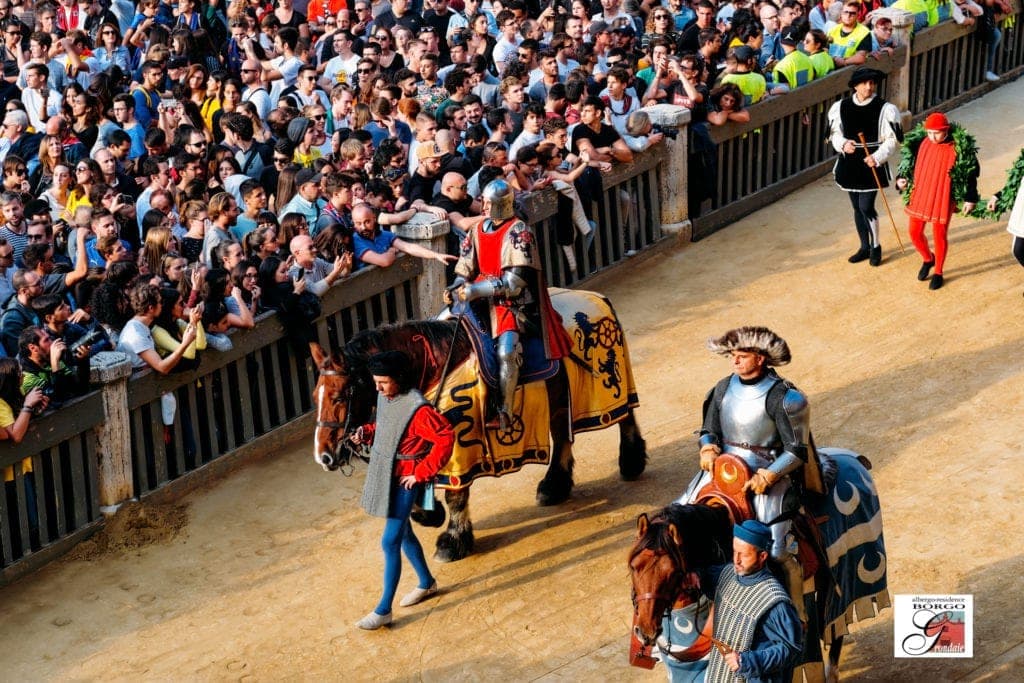 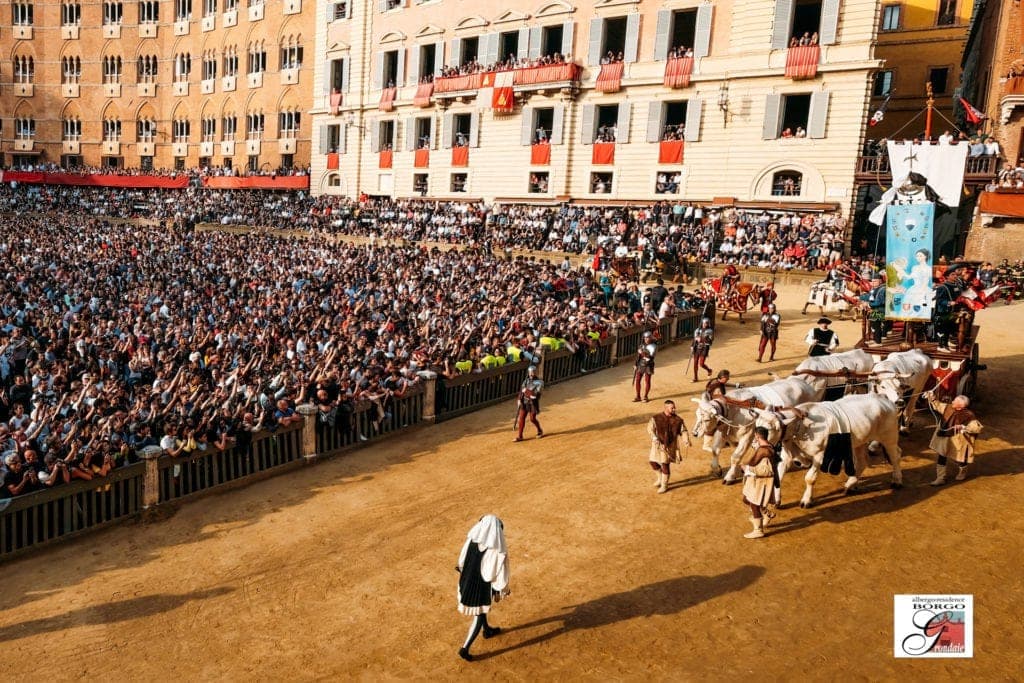 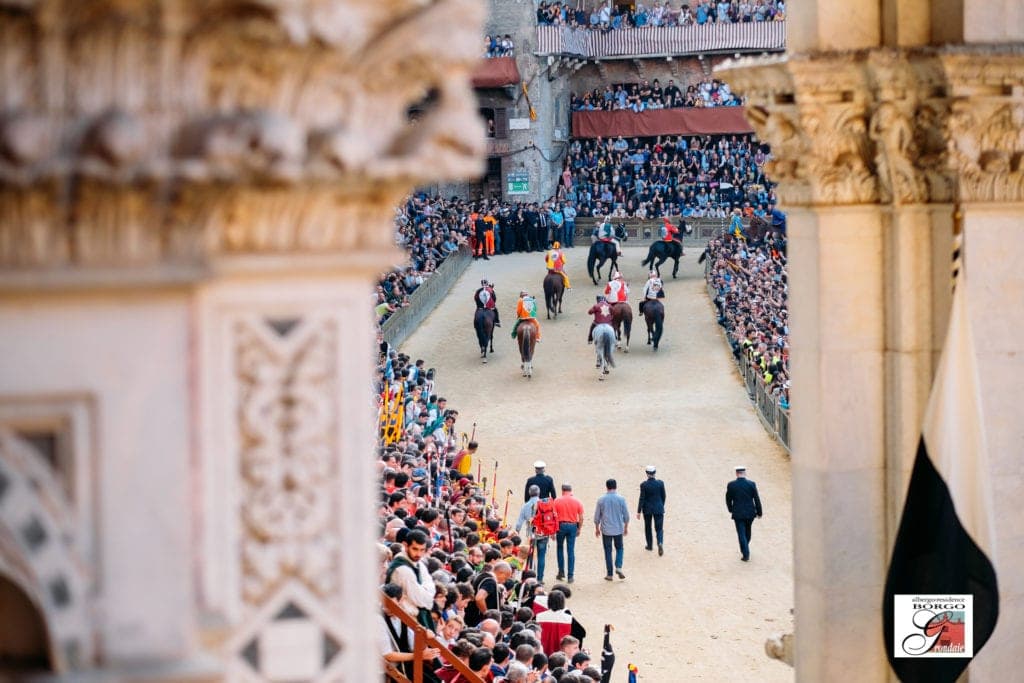 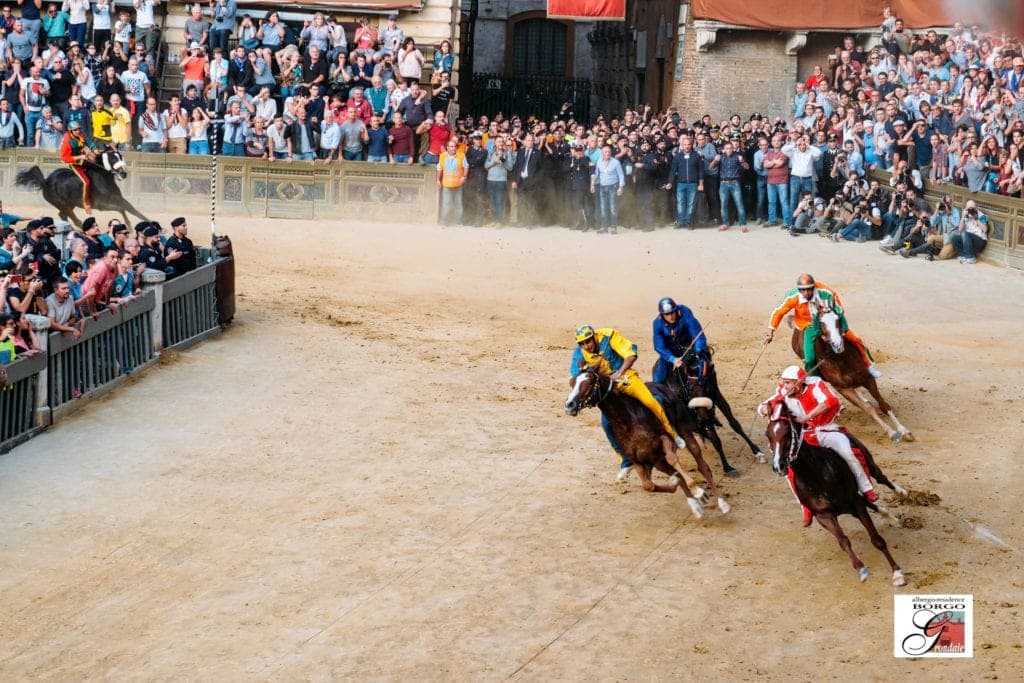 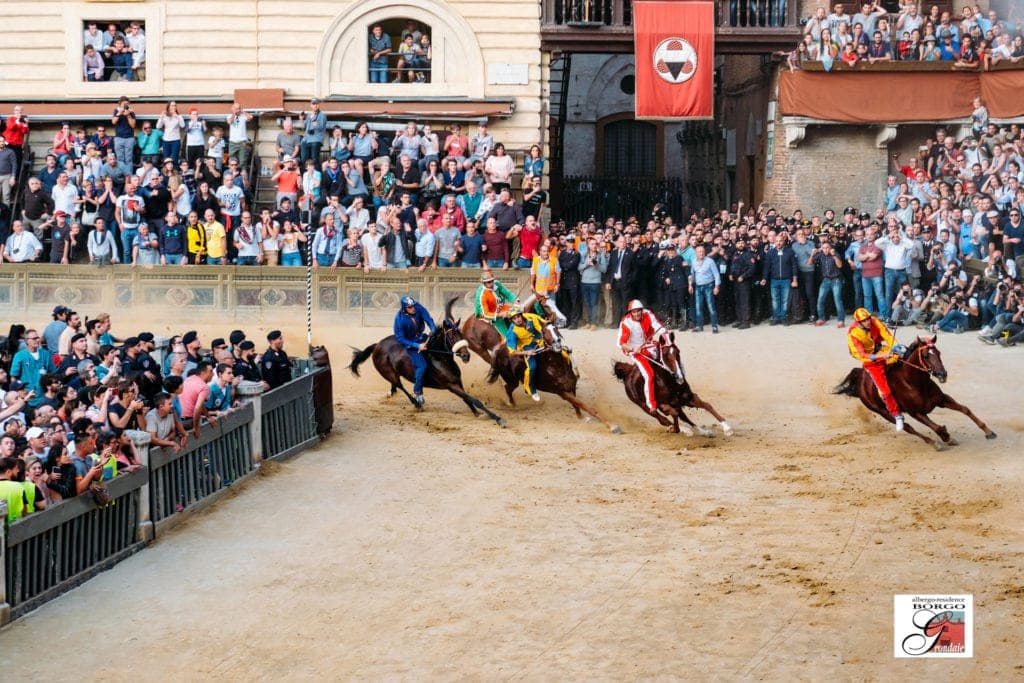 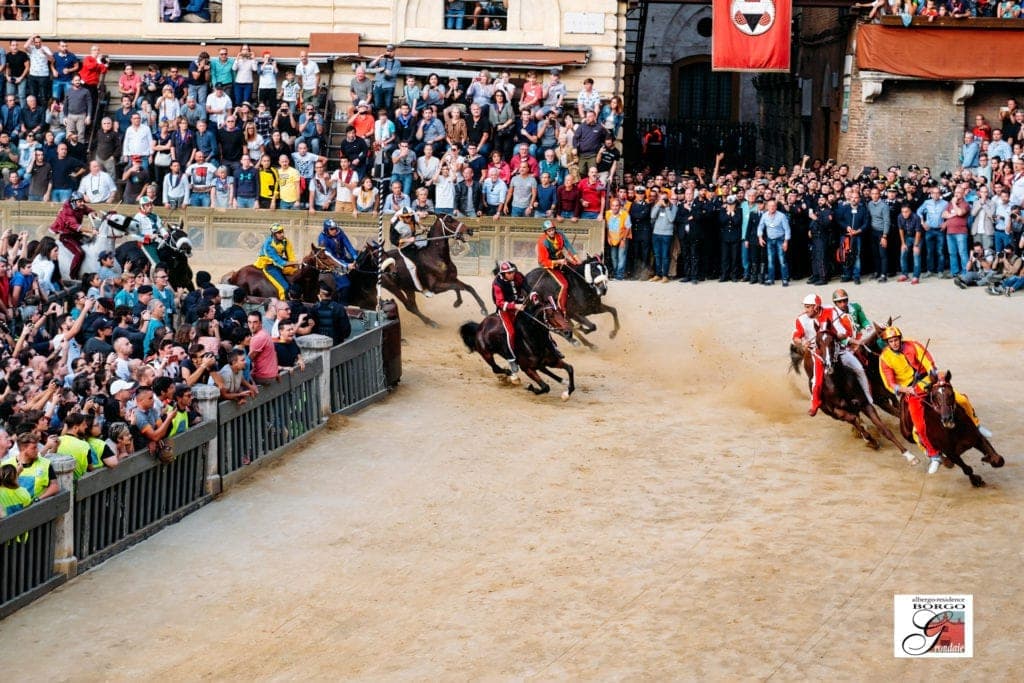 Departures of the Historical Parade from the Government’s Palace: 4:30pm in July (3:50pm in August)

So after the horse’s blessing you should go to Piazza Duomo and stop in front of the Government’s Palace to see the Historical Parade walking down to the Campo Square. In this way you have the chance to look at all the details of the medieval costumes of the 600 people. Afterward you can move to Via Duprè. This is actually the only access to get into the Campo Square and it remains open until 6:15pm in July (5:50pm in August). There are also some restrictions to follow and we will be glad to give you more information at Borgo Grondaie.

Where can you see the Palio?

The view from Piazza del Campo is limited but believe me that thanks to the shell shape of the square, everyone can see a good part of the loop. The feeling in the square is really magical that day.

If you decide to see the palio from the terraces or the windows, there are professional agents selling tickets and they will provide you all the information such as the time you have to take your seat. Of course we can help you to get tickets for Palio!

Entrance of the historical parade in Campo Square: 5:20pm in July (4:50pm in August)

The moment when the Historical Parade enters the Square is announced by “Sunto”, the so called Mangia Tower’s bell. It takes the name from the “Assunta Virgin” and it will give the rythm, like the ticking of the clock, to the parade. The very first bell’s ring the contradaioli (senesi people) feel a thrill up their spine. This is definitvely a very emotional moment.

Exit of the horses from the Townhall courtyard: 7:30pm in July (7:00pm on August)

At the end of the Historical Parade, there’s the amazing flags waving in front of the Town Hall. Each contrada takes part to it with one flagplayer and a drummer. When the square is completely in silence, the Palio of Siena is starting.

From the moment when the horses get into the Square and reach the “mossa” (the starting point of the race) the exitement gets higher and higher. We recommend you to be careful to every little detail especially do not ask for any explanation or do any comments. Suddenly the Campo Square will be all in silence , as everybody is waiting for the “secret envelope” and to know the position of each contrada at the start. You will notice that everybody is looking at the stage too and at a traffic man in uniform carring the white secret envelope, ready to give it to the reader.

Now the reader opens the envelope and begins to call the contrade following the order that the Lucky Lady gave to each contrada running the race. The best positions are the fourth and the fifth one according to the expert jockeys; the worst one is the so called “rincorsa”; this means that the last contrada is not allowed to enter the ropes but it has to give the start to the race running fast from the back. This position is definitively unfavourable because one has to be faster and clever to give the start at the right moment. So it has the power to decide when it’s time to start the race, and the starter has to be quick enough to put the ropes down when it is ready to enter.

It could take ten minutes or maybe an hour to get the right start. It’s all regulated by the secret business between the contradas and this keeps the atmophere even more exiting.

End of the race

And what happens after the race? Well, after the race the advice is to stand exactly where you are, because a lot of people will try to get out of the Square at the same time. So then just follow the crowd to the exit of the square and go to the Basilic of Provenzano in July, (or to the Duomo in August) where the winning contrada with the Palio Banner (the drappellone), the jockey and the horse will head to say thank you to the Virgin and singing the Te Deum.

leave your review about us